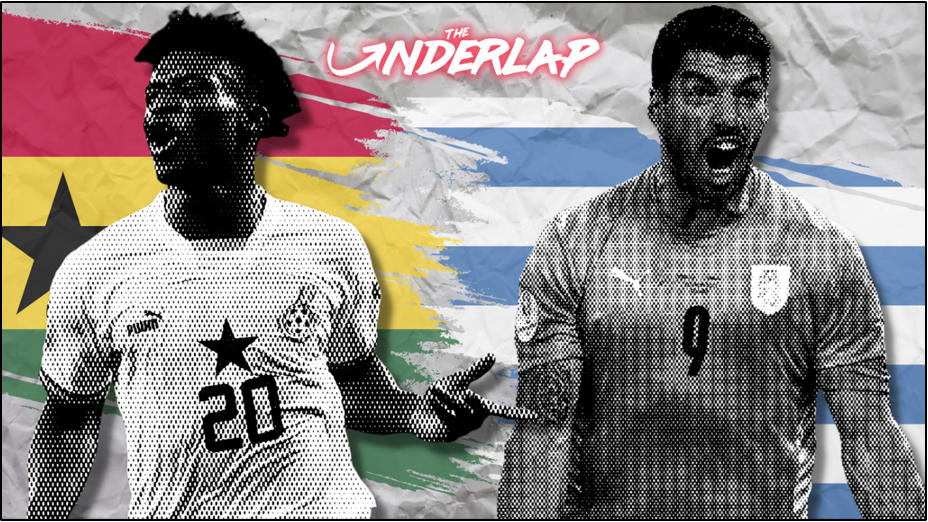 The history of Ghana vs Uruguay by Isaac Williams

Some 4,550 miles separate Ghana and Uruguay yet they are universally united by a moment of division.

Luis Suárez’s handball in the 2010 World Cup quarter-final has made him an infamous figure in Ghana, his name synonymous with the Devil’s.

Ghana were the last African representative left in the tournament – a tournament that, although held in Africa, shed a negative light on the participating African nations who were all knocked out in the group stages due to various levels of in-fighting and tactical inadequacy. The impossible seemed possible for The Black Stars who were a win away from becoming the first African team to reach a World Cup semi-final.

Their bubble was burst by the hand of Suárez, who stopped a certain Ghana goal on the line. The problem was: Luis Suárez wasn’t the goalkeeper. He received a red card and was ejected from the field, covering his face in an attempt to hide away from the disgrace.

That was it. A goal here and Ghana had done it. They would have achieved what no African nation would have done before at a World Cup finals. Asamoah Gyan missed the subsequent penalty and his nation were knocked out on penalties.

Suárez celebrated Gyan’s penalty miss in the tunnel as though he’d scored in the opposite goal and in the end, with Ghana failing to convert, it was just as important as if he had. 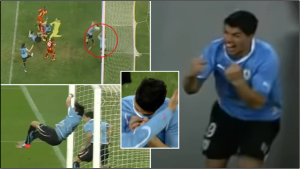 Twelve years later and the two teams face each other once again for only the second time. Ghana’s dream of being the first African team to reach a World Cup semi-final is still alive: a win against Uruguay would see them finish second in Group H behind Portugal and progress as long as results go their way.

Uruguay ultimately triumphed on the day defeating Ghana 2-0, with two first-half goals from Flamengo midfielder Giorgian de Arrascaeta, who headed home a rebounded effort from Suárez before the ex-Liverpool man teed him up on the volley which was struck low, underneath the frame of Ghana’s Lawrence Ati-Zigi.

Before Uruguay’s first goal, Ghana had a chance to rewrite history as Mohammed Kudus was brought down for a penalty in the opening stages. The chance was taken and missed by André Ayew who, after a stuttered run up, hit a weak penalty that was easily saved by the culprit Sergio Rochet. History repeated itself. History is cruel.

But Ghana got the last laugh.

They tried their mightiest to turn the game around, dominating possession in the second half and creating chances that threatened Uruguay’s lead but weren’t fruitful. South Korea defeated Portugal in the game adjacent so despite Uruguay winning they were knocked out finishing third on ‘goals scored’.

Ghana did it. They exacted their revenge despite losing the game. Going down fighting they had dragged Uruguay with them, destroying the hopes of a nation that destroyed theirs 12 years ago.

Uruguay lined up in a four-three-three on paper, with a forward line that were happy to rotate, consistently taking it in turns to drop between the lines to allow the other two forwards to form a front to ahead of them. This was to make the transition between defence and attack easier, with one of the forwards creating a diamond shape with the three midfielders as well as a triangular shape made up by the closest full-back and striker.

Uruguay used these shapes to isolate players in the Ghanaian press and bypass them with quick, interlinking passes that progressed the ball quickly into the wide areas.

The way Uruguay attacked when in possession emphasised the wide areas in order to generate chances. The two more advanced midfielders in de Arrascaeta and Real Madrid’s Federico Valverde would enter the forward line with one of the forward three dropping between the lines and the two split ahead of him. The full-back closest to the play would overlap, hugging the touchline, whilst the full-back opposite would tuck into the half space ready to receive a switched pass that would unsettle Ghana’s defensive structure. 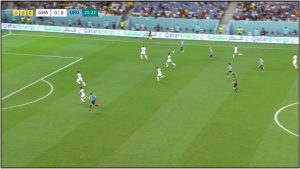 As you can see in the example above, in the build-up to Uruguay’s first goal, Suárez and Darwin Núñez have split with Facundo Pellistri dropping into the midfield. De Arrascaeta and Valverde have pushed up to join the attack. The chance was created by Suárez drifting wide and receiving a cross from Núñez that was missed by two Ghanaian defenders due to him picking the pass early. Suárez controlled the ball with his chest and skipped past one defender, who slipped, and struck the ball through the legs of another. Pellistri and de Arrascaeta entered the box late and it was the latter who headed home the rebounded effort.

Uruguay attacked well but they struggled to break down Ghana in the second half. They put up a solid defensive performance themselves, blocking three Ghana shots in their narrow, low block that forced Ghana to build up slowly.

They had seven shots on target during the game but were unable to convert their chances. Their rotating cast of forwards struggled to find the back of the net with de Arrascaeta claiming man-of-the-match through his goal scoring efforts. Overall, Uruguay shouldn’t be disappointed in the way they played but their lack of ruthlessness going forward in the first two games hindered them greatly and cost them a position in the knockout rounds.

Mohammed Kudus has been the Black Star that has shone the brightest this World Cup, scoring two in the previous game against South Korea. He created two chances in the game and also won the penalty which could have provided Ghana with a goal if it wasn’t 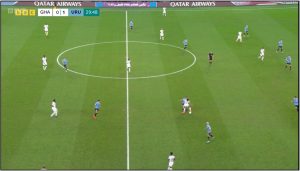 for Ayew’s miss. Kudus, although he started the furthest forward in Ghana’s four-two-three-one, dropped deep to make up a midfield five ahead of a back three when in possession. He’d typically receive the ball with his pack to goal and aim to turn his man using his speed to break away and dribble forward, linking the play from defence to attack.

Ghana’s overemphasis on using Kudus as a tool to progress was sniffed out by Uruguay who quickly counter-pressed in groups of three and four in order to win the ball back quickly and cause turnovers in possession.

Ghana don’t have many major areas of concern on the field apart from the ageing partnership of the Ayew brothers in the forward line but they have adequate replacements in Iñaki Williams and Kamaldeen Sulemana. They didn’t go a long way to redeeming themselves after the embarrassment of the 2022 African Cup of Nations but they achieved redemption in the eyes of Asamoah Gyan and everyone who suffered in 2010.